Vacation, or not, it can be daunting leaving your comfort radius of known kitchens and restaurants, when you have food allergies. Especially when leaving that radius also means leaving the country.

A few weeks ago, my family and I went on our first real vacation in five years. Its been since BC (Before Children)! That’s not to say that we haven’t left our comfort zone in all that time. In fact, we’ve moved five times in those five years, and we’ve taken several trips to visit relatives. We even had a mini-vacation in Colorado, en route to a wedding. Although Colorado is probably the best state in the union to visit if you have food allergies, so maybe that’s not saying much!

But now we were heading for Mexico, and I would not be doing any cooking, nor was I certain that I could explain my food issues to the locals. Would I be able to safely eat gluten-free and allergy-free on vacation? Of course I have to premise this by saying, its not like we were backpacking, staying in hostels, or entering areas where my limited Spanish would meet no English. Although going über-local is my preferred method of travel. I have travelled this way for most of my life, and frankly, as far as food is concerned, I am more confident in some ways of the food that I eat at small stands and local eateries, because the owner is also the chef and his wife may be the waitress, and they can tell me exactly what’s in their food.

My favorite food experience while traveling was when I met my (then) fiancé in Madagascar just after he proposed to me. In Fort Dauphin, we had the most divine langoustines dipped in garlic butter, on a breezy cliff, overlooking the Indian ocean. While that meal was memorable, it was nothing compared to the next day, when we hired a guide to take us around the islands in a pirogue.  He brought us to an islet only large enough for one fisherman’s family to live on. We greeted the fisher, then watched as he speared a fish right in front of us. In no time, he cleaned it and grilled it on their campfire. They served it with a lime-butter sauce, and rice on the side. So simple, and yet I cannot tell you just how delicious it was. It must have to do with how fresh the fish was. It almost melted in my mouth. I will never forget that meal, served on bamboo plates, the salty air still in my nose.

I didn’t have to worry at all about gluten. Gluten doesn’t lurk in fresh food. If they were gong to use flour, I would have known about it, because I was right there watching! But we were too far afield for gluten to be a surprise ingredient, like it is in so many pre-packaged, highly processed foods. Its the larger sized restaurants with pre-made dishes, and especially pre-made dressings and sauces, that I am afraid of.

I know, I know: “Poor thing.” Like I said, I’m not backpacking. Actually, I’m going to an all-inclusive resort in Mexico!

I never thought “all-inclusive” was my style of travel. But since I have two children under the age of four, for the first time in my life, it made sense. I didn’t want to have to do much, or think about much, except enjoy the company of my little ones and my husband. And catch up on sleep. I’ve been having serious bouts of insomnia for months, probably years now, and I think it has to do with food allergies. I discovered my problem with gluten 10 years ago and have kept it out of my diet ever since. But recently, something else has been bothering me. Its been causing me indigestion. Which in turn has caused me to lose many a night’s sleep. Which, of course, all but ruins the next day.

So in addition to not eating gluten, I had been striving very hard to get dairy and soy out of my diet. Just to see. Which one? Which one was the culprit? And I didn’t want to go and mess up my long-awaited, much needed vacation, by eating something that would totally disagree with me. Before leaving the US, I contacted the resort via twitter and email. They instructed me to speak with the food concierge when I arrived. That was the first thing I did when I got there. Well, after a sip of champagne…. I know. I sound spoiled already! But it was an all-inclusive, which includes the welcome champagne in the lobby when checking in! 🙂

As it turns out, Dreams Resort in Tulum, Mexico was 5-star in its accommodation of multiple food allergies. The food concierge sent me to the head concierge, who printed a letter for my approval, which I could then bring to the maître d‘ at any of their 9 restaurants. 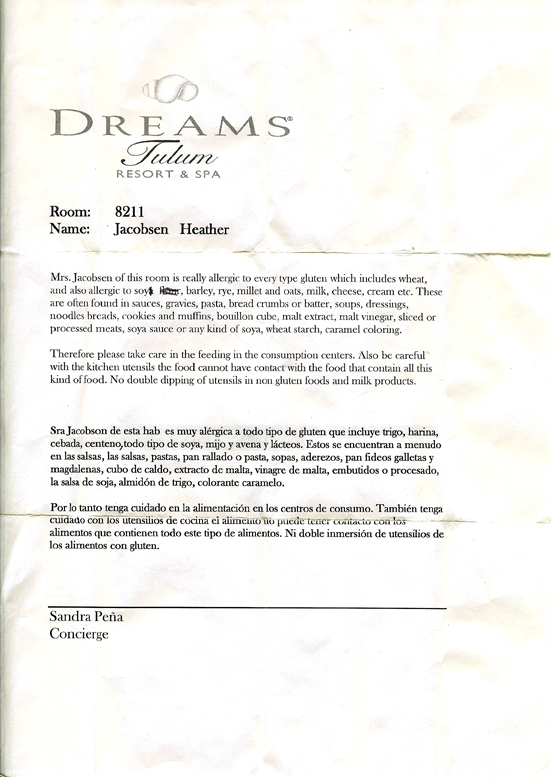 I was at the resort for a full week and I kept that letter with me at all times (in my beach/pool bag).  Hence, the worn and tattered look. I presented it to each restaurant and at first, I was made very simple, but most certainly, allergy-free meals. I had a lunch with grilled shrimp tacos on soft corn tortillas, and refried beans on the side. Fine, fine. I had sushi one night without sauces. A little dry maybe, but allergy free.

For an appetizer, my husband and I split a shrimp salad with a (double-checked on the ingredients) mango-papaya dressing. Just perfect. My favorite dishes were the ceviches (they had several different styles) and the fresh grilled fish with simple olive oil and herb sauces. As I was there another day or two, the waitstaff and the restaurants we frequented most, began to recognize me (the crazy lady with the big hat and the multiple food allergies). The head chef at one restaurant was actually excited to offer me a gluten-free tuna tart, and some gluten-free bread which he special ordered (it took a couple days to arrive)!

Eventually, I learned to live without that letter, having memorized the words for gluten, soy and milk in Spanish, and being able to speak somewhat freely with the waiters about my needs. My favorite dish came one evening when, sadly, I had to eat alone. My husband got some kind of stomach virus (maybe from the water) and could not eat. The irony! I’m the one with the food allergies and I was eating like a queen, while the poor guy wallowed in abdominal misery.

Anyway, this one evening I went to eat at the Seaside Grill and spoke with the waiter about my dietary restrictions. I imagined he would return with a nice dish, but without sauce. Instead, after speaking with the chef, he brought me a steak medallion and grilled shrimp with a delectable madeira and mushroom sauce that they made especially for me, without wheat flour (harina!). I was so impressed! Unfortunately, I could not share the meal with anyone (but my book). And I couldn’t take a picture, because it was night and very dark. But believe me, it was the best dairy free, soy-free, gluten-free meal, I have had in ages! 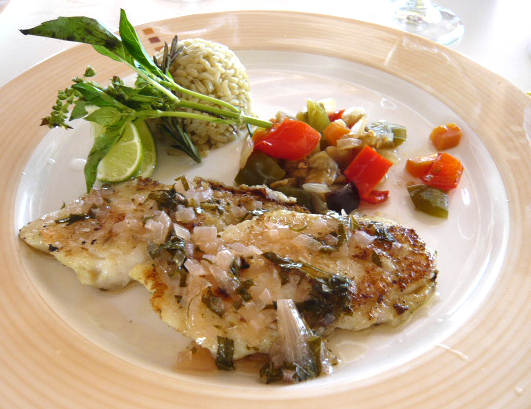 Speaking of photographs, I have to say: I love my little Nikon D70. I really do. Its such a work horse. And I love my Tamron 90mm lens that I use as both a macro and a portrait lens. Its not hard to get beautiful images with that lens. I brought my camera bag all the way to Mexico with me. And I left those guys in the bag all week… I don’t know. I take pictures for a living, and I take pictures of my children all the time…. and when it was finally time for me to relax, I just couldn’t bother with my camera. Which is amazing for me. Because photography has always been my passion.

But instead, I played around with my point-and-shoot, which fit easily into my beach bag, and I have to say, I’m quite impressed with its ability to take food photos. For a point-and-shoot, anyway. It does have a macro setting, which is important. And an optical (not digital) zoom, with a Leica lens. So that helps. All  the pictures in today’s post were taken almost effortlessly with my point-and-shoot. While it will never replace my Nikon, this might just be my new slice on the side. You know, the one I take to fancy restaurants, when I want to photograph the meal (on the sly) for my next review. What do you think?

So how to eat gluten-free and allergy-free on vacation? Aside from booking a stay at Dreams Resort, what I really want to say is that the best way to stay on top of your food allergies is to take control of your diet. And if you are leaving your comfort zone, this means do some research ahead of time about where you will be staying and where you might possibly be able to eat. Learn how to talk about your dietary needs in the language of the country you will be visiting, or at the very least ask for some assistance in writing a letter. Speak to the people who are serving you about what’s in your food. I find that most people take pride in the food that they cook for you, and they want you to have a pleasant experience. No one wants to make you sick! So help them guide you to the right food choices and everyone will be happy.

This site uses Akismet to reduce spam. Learn how your comment data is processed.